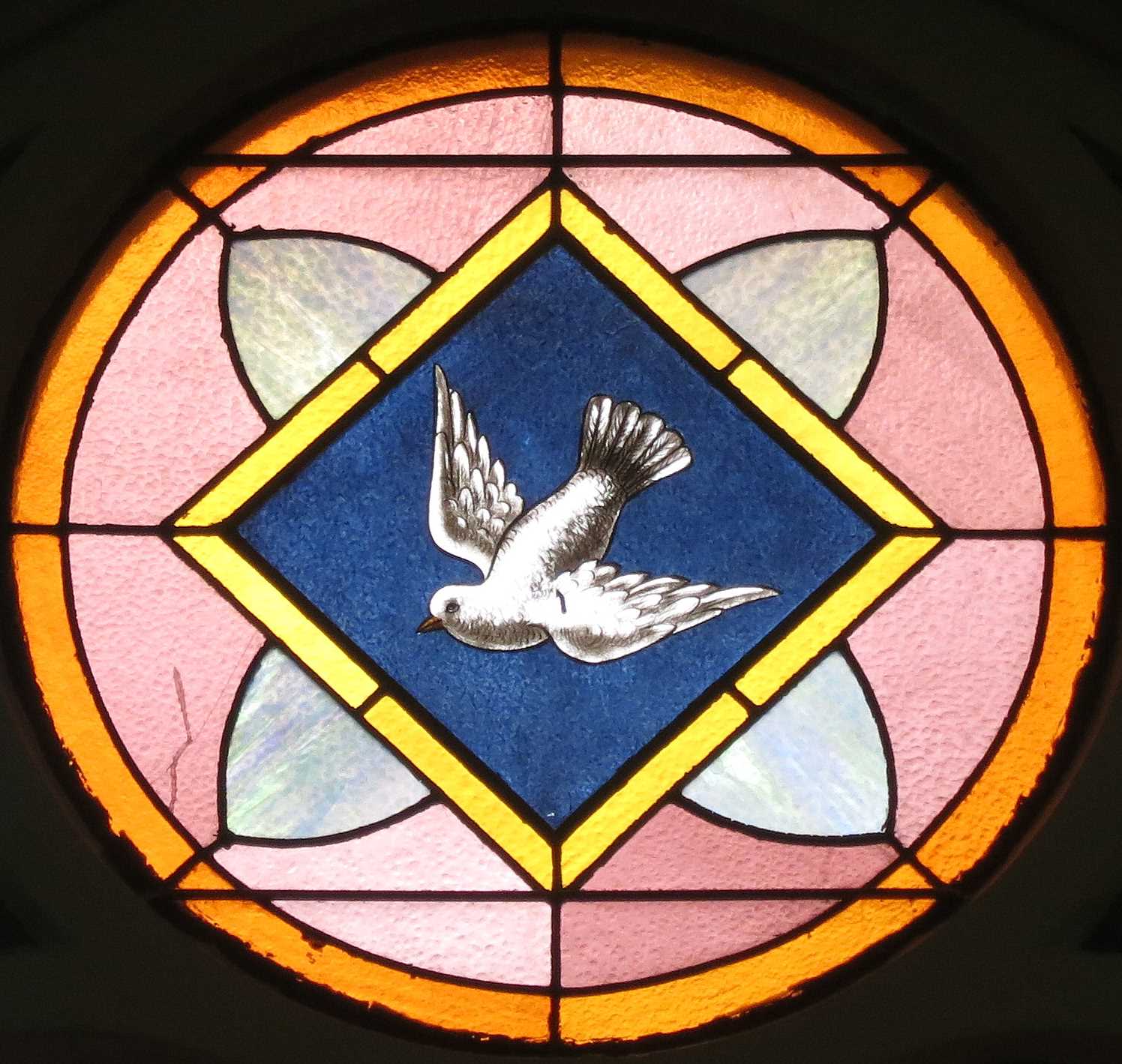 The Holy Ghost is a pussy. Oh yea, I said it. The holy ghost sucks my ass. He is a los­er. He is self­ish and he obvi­ous­ly does not do his job. The holy ghost drops the ball every chance he gets. Pass him the ball and you can count on him to throw it into the stands and leave the building.

Ever notice how the holy ghost gets out of dodge at the first sign of trou­ble? I mean is he THAT sen­si­tive? Why do we con­stant­ly have to talk about NOT offend­ing the holy ghost? I mean isn’t the dude like mil­lions of years old at this point? Has he not seen it all? I guess not because it seems he still runs for cov­er when like a 14 year old boy is play­ing vio­lent video games or look­ing at a naked lady. Jesus Christ the holy ghost is invis­i­ble, how many naked ladies do you think he has seen at this point? But no, that kid, who just killed anoth­er dude play­ing black ops or is look­ing at some chick in a Vic­to­ri­a’s Secret cat­a­log, he is on his own because like Elvis, the holy ghost has left the build­ing. Imag­ine being in a fox­hole with the holy ghost. He is your best bud­dy. Telling jokes, say­ing how we are going to get those guys and then as soon as the bul­lets start fir­ing, you look to your right and he is.….….….….gonzo. I mean if the HG is not around after say 10 min­utes of “sin” and work­ing hard to get you to stop or what­ev­er, what good it HE?

Were we not all giv­en the gift of the holy ghost? Some gift. If it only helps out when you are right­eous and not when you are mak­ing mis­takes I mean, what good is he? And anoth­er thing, so say I steal the prover­bial can­dy bar, yeah that’s right, the f‑ing can­dy bar and the holy ghost, well, he is griev­ed and he bails faster than Usain Bolt com­ing out of the blocks.……when does he come back? Oh, that’s right, I have to beg for him to come back, I have to plead.….….…and for what, so the dude can come back and be with me until I make a mis­take again? Yeah, that sounds good because I will prob­a­bly be mak­ing anoth­er mis­take in about.….….…..wait for it.….….…wait for it.….…5 min­utes. Thanks a lot holy ghost, you dumb ass.

And why won’t he do his freak­ing job? I remem­ber pray­ing each night in the MTC, cry­ing and beg­ging God to let me know the book and the church were true.……nothing. No won­der the New Era put out that fake sto­ry last year about the girl who read and prayed about the book 4 TIMES and nev­er got an answer.….….the 5th time? What does she do? She decides she does not even have to pray because she sim­ply already knows its true. Nice work holy ghost. Final­ly, on the bot­tom bunk at the MTC, I had worked myself up into such an emo­tion­al state and while lay­ing in bed, try­ing to stare inside my own body for an answer, final­ly I just said, ok, I have been answered. What a bunch of shit. But no, the holy ghost is an equal oppor­tu­ni­ty pussy because did he ever answer any of my inves­ti­ga­tors when they tried out Moroni’s promise? Nope.

I dis­tinct­ly remem­ber my first dis­cus­sion and that we chal­lenged her to read the scrip­tures and do Moroni’s promise. After the dis­cus­sion, I told my comp how it is basi­cal­ly game over and she is going to get dunked. Well, guess f‑ing what? We go back and lo and behold she said she did not feel anything.….….I mean where the hell were you holy ghost? Were you out play­ing cards with Light of Christ or some­thing? After about six months I real­ized it was not because they were sin­ning or not even try­ing the promise, I real­ized the holy ghost just was not answer­ing them. I wised up and total­ly soft sold Moroni’s promise and focused more on dunk­ing them for social and per­son­al­i­ty rea­sons. That was a lot eas­i­er than rely­ing on the lazi­est mem­ber of the god head, the holy ghost. I had one girl my whole mis­sion out of over a hun­dred peo­ple who said she got a spir­i­tu­al con­fir­ma­tion that the book was true. Less than 1% suc­cess rate. I mean door to door fliers have yield a high­er rate of return than the holy ghost.

I love it when peo­ple get up to speak in church, in any church set­ting and they HOPE and PRAY the holy ghost will be with them.……wtf? Should­n’t the holy ghost ALREADY be with them? I mean is it that hard to get the holy ghost just to show up? Maybe we should ask him what treats he likes and just leave a bowl of them up on the podi­um of the chapel. Peo­ple would be like, “hey, what is with the bowl of yel­low only M&Ms?” and the bish­op would be like, “well, we got a let­ter from the first pres­i­den­cy say­ing that the holy ghost likes, M&Ms, but only the yel­low ones, if the bowl has any brown or red ones, he gets pissed”.….….….….……and what does that say about the god damn con­gre­ga­tion? I mean they were all bap­tized and giv­en the holy ghost,.……is He just real­ly good at mak­ing babies cry and dads surf their iPhones and moms look­ing at oth­er moms and their boob jobs and nice clothes?

When I was start­ing to learn the truth about the church, the joke sure was on me because I fast­ed and prayed while I did it. I thought the Holy Ghost would man­i­fest the truth of ALL THINGS and god dammit, if god made that bor­ing book from rock and a hat, well, ok,.….….…but did the holy ghost let me know the rock and the hat, and the mason­ry, and the polygamy and the Book of Abra­ham and all the rest.…did HE let me know it was all good? Hell no! did it mat­ter I had over 35 years of com­mit­ted dis­ci­ple­ship under my belt and a shit­load of tithing and tem­ple atten­dance? Nope. It did not mat­ter because he wimped out big time. He was a f‑ing no show. At least HE is consistent.….….….….….…

The holy ghost may be the biggest joke the church has going. My favorite is at the end of some meet­ings, some big shot gets up and says “the holy ghost has been with us and fed us”.…or what­ev­er. Real­ly? Where was he? Did some­body set up a reclin­er or some­thing for him up on the stage? Was up there sit­ting where the ward clerks used to sit in the 80s? WTF?????!!!!! Why does some­body need to point it out any­way? Should we not have all got the HG memo dur­ing the meeting?

And WHAT is the holy ghost any­way? We of course know he is a dude but maybe the prob­lem is he has too many roles to fill. I mean what the hell is the holy spir­it of promise any­way? I remem­ber when I would sin, think­ing well, RIGHT NOW, my mar­riage is NOT sealed by the holy spir­it of promise and that if i did not beg and plead and repent RIGHT NOW and I died that I may not have an eter­nal marriage.….how stu­pid is the holy spir­it of promise? The light of Christ? is that the HGs like younger broth­er or some­thing? The Tes­ta­tor? Real­ly? Ask all of the inves­ti­ga­tors from my mis­sion how that worked out. The Com­forter? Come on. Real­ly? Maybe he only shows up when peo­ple pass way but at my Grand­mas funer­al I pret­ty much saw only peo­ple com­fort­ing my Mom.….and when she was alone, she was a mess. Thanks for hav­ing my back on that one HG! The Spir­it? Well what does that mean anyway.….because you know there was always some sort of dif­fer­ence when talk­ing about the HOLY GHOST and the spir­it. Kin­da like the spir­it was sort of the invis­i­ble slime left behind as the HG moves at a bil­lion mph around the world.…..like ghost busters, “He, slimed me, and I feel sooooooooo good” Mem­bers walk around on Sun­day as if they have this slime all over them.….…..talk about a snipe hunt.

If the holy ghost were a friend, he would be the kind of friend who only shows up when things are good and you are flush with mon­ey and then asks you for a loan.

Look, I’m done with the Holy Ghost. He is a bas­tard and can go screw him­self. I am tired of pre­tend­ing some­thing is there when it is not. I am tired of hear­ing Casper the Friend­ly Ghost get all this cred­it for shit that just hap­pens any­way and is part of a nor­mal life experience.

Source: Post​Mor​mon​.org — The Holy Ghost is a pussy

I’d love to hear your elab­o­ra­tion on that point, Ivanhoe77.